Sarah Gates is currently completing a PhD in Music Theory and Cognition at Northwestern University under the direction of Professor Richard Ashley. She was a visiting scholar at the SMART lab in 2012-2013 while completing a Master of Music degree in saxophone performance at the University of Toronto. She recently finished a Master of Arts in Music Theory at McGill University where she studied under Stephen McAdams and Robert Hasegawa. Her thesis project, which was awarded the Joseph Armand Bombardier Award (CGS-M) by the Social Sciences and Humanities Research Council, investigated perceptual interactions of pitch and timbre by exploring the effect of timbre change on musicians’ ability to categorically identify melodic intervals. Empirical findings from her research projects have recently been presented the International Conference on Music and Emotion in Geneva, Switzerland (October, 2015) at, and the International Conference for Music Cognition and Perception in San Francisco (July, 2016). Her primary academic research interests include pitch perception, auditory imagery, aural skills acquisition, multimodal interactions, music literacy, and musical performance. Her current doctoral studies at Northwestern University are supported by a doctoral fellowship awarded through the Social Sciences and Humanities Research Council of Canada. 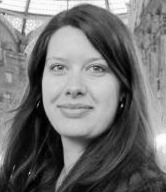