Carolling can be good for your health

December 2018: Short broadcast news piece that features some of the ideas behind our SingWell project.

February 2018: Sean Gilmore’s video entry to the NSERC Science, Action! Competition. His video entry featuring his research on neural entrainment received 1500 views and was listed among the top 75 entries.

Understanding the benefits of singing for communication and well-being

The Science of Tone Deafness

July 2016: Falconer’s book “Bad Singer: The Surprising Science of Tone Deafness and How We Hear Music” examines this affliction and how it affects his passion for music. The Agenda in the Summer welcomes Falconer as well as Frank Russo, psychology professor and director of the SMART Lab at Ryerson University to discuss the science of tone deafness.

October 2015: A new Parkinson’s study has participants literally singing its praises. A Canadian research project being done by Dr. Frank Russo and his master’s student, Esztella Vezer, is looking at a unique way to help tackle that problem — by studying a Toronto choir made up entirely of people with Parkinson’s disease. 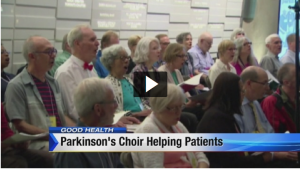 September 2015: A choir of Canadians with Parkinson’s disease is helping researchers such as Esztella Vezer, test how well the performers regain facial movement to express emotions. 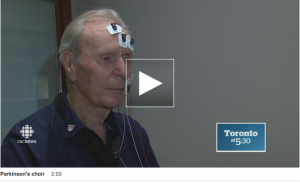 June 2015: A unique choir that we established at the SMART Lab, is testing out the idea that singing can help patients manage the symptoms of Parkinson’s disease. 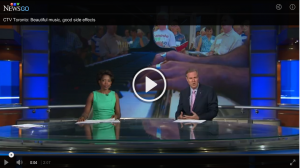 April 2015: A group of 50+ students at Ryerson University known as the SMART Lab Singers, come together to sing by Lake Devo at Ryerson University on World Voice Day on April 16, 2015. This group was established from an undergraduate thesis that was conducted in the lab by Saul Moshé- Steinberg.

Music and the Mind

August 2014: We found that expressive signing restored the capacity for expressive speech so they created a Parkinson’s choir that meet weekly at the Royal Conservatory of Music.

August 2013: Dr. Frank Russo is a member of the Communication Team at TRI. This team recognizes the importance of communication in our daily lives in which the team helps people to understand one another and to be understood.

December 2012: There’s growing evidence that music can help people struggling with disorders of the mind, like autism, dementia, and Parkinson’s disease. This has given us a way to see how music can help rehabilitate damaged circuitry in the brain with disease’s such as Parkinson’s. 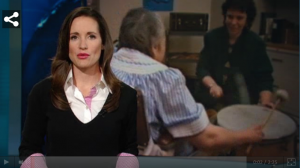 In The City: Sick Kids Art and Music Showcase

April 2012: Arla Good, a PhD candidate in the SMART Lab, worked with a group of children from Sick Kid’s Hospital born with hearing impairments. This group of children learned to paint or play the piano by taking part in research that explores potential benefits of arts-based education for developing communication skills.

Music And The Brain: The SMART Lab

March 2012: We are trying to find out the answer that may lie in music’s perceived ability to regulate one’s mood – to cheer you up or to calm you down. But is it possible that waves traveling through the air actually hold this awesome power, the power to influence how you are feeling?

The Emoti Chair at The Ontario Science Centre

February 2011: First time in the Emoti- Chair for Emma and Robertson Russo at the Ontario Science Centre.

November 2010: Dr. Frank Russo is a cognitive scientist, musician, and armchair engineer. With an educational background spanning music cognition and hearing science, he is deeply interested in supporting communication of emotion in the context of music and beyond. As Director of the SMART (Science of Music, Auditory Research and Technology) Lab at Ryerson University, Frank and his colleagues have developed a chair that uses vibrotactile stimulation to bring music to deaf individuals. Research shows that deaf individuals have a physiological response to music that bears similarity to that of hearing individuals despite not having access to auditory stimulation.

The Emotichair on the Daily Planet

The Emotichair World Debut at Clinton’s

March 2009: Two research teams from Ryerson University, team up to put on The Emoti-chair’s world debut at Clinton’s Tavern in Toronto. Here is one of the many media stories . . . .